Will Todd’s Clarinet Concerto debuts at number 3 in the Classical Charts! 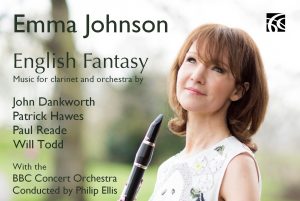 “Delightful new repertoire for the clarinet to savour”

Emma Johnson’s recording of Will Todd’s Clarinet Concerto recorded with the BBC Concert Orchestra on the Nimbus label entitled An English Fantasy debuts at number 3 in the Specialist Classical Charts!

“I have sensed an increasing desire from audiences to engage with the new/contemporary music I perform, and a hunger for lyrical, evocative works that are eminently enjoyable. It is a joy to play these wonderfully lyrical pieces, by composers who have the ability to speak to a wide audience – no mean feat.”

Emma Johnson MBE was a guest on BBC Radio 4’s Midweek recently with Libby Purves where she discussed her recent portrait sitting for Pembroke College, Cambridge and her new recording An English Fantasy, featuring Will Todd’s Clarinet Concerto recorded with the BBC Concert Orchestra on the Nimbus label.  The interview plays out with a sneak preview of Will Todd’s concerto.  Enjoy!

Emma Johnson MBE is a clarinettist whose career was launched in 1984 when, at the age of 17, she won the BBC Young Musician of the Year. She is the first woman to have a portrait commissioned by the University of Cambridge’s Pembroke College since the college was founded over 650 years ago.

“Will Todd’s Concerto for Emma is impish and jazzy, with bluesy muted trumpet setting off the Ballad central movement. Johnson slips and slithers through the lively outer movements with a great sense of character.”

“Will Todd is one of the leading voices in British contemporary music….Here he adds to the store of English clarinet concertos. This one goes with a frictionless, swerving swing. It’s lyrical, yes, but also carries inflections from blues and jazz.. The finale is punchy, howling and sinuous. The movement titles give a hint: I. Blues and Dance; II. Ballad and III. Funky Tunes.”