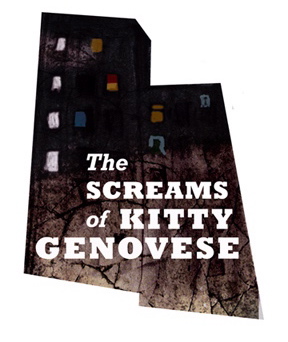 Some years ago Will Todd collaborated with New York performance artist and playwright David Simpatico to create their haunting music theatre work The Screams of Kitty Genovese. At times funny, sometimes brutal, always moving and ultimately devastating, the work is based on the true life story of the 1964 murder of New Yorker Kitty Genovese. It’s a very powerful work which has had a number of productions (Boston Conservatory, Tete a Tete Opera, Edinburgh Festival, the 2006 New York Music Theatre Festival) and has received wide critical acclaim.

Hannah Green had the chance to ask some questions to Will and David about the piece.

Hannah: You first worked on this piece with David in 1998. Has the piece evolved during that time?

Will: When David and I first worked on Kitty in 1998 we had to discover the best way to collaborate. David is incredibly musical and has a strong instinct for the rhythmic impetus of the libretto. I needed to learn how to respond to this in a way which helped the story unfold. Kitty has had many versions during which time we have honed it down in a way which I hope maximises the impact of the story and characters and gives a strong presentation of the central themes of the work. It’s had at least 10 versions with workshops, readings and productions and at least 4 different orchestrations! Lots of work – but you need incredible patience and resilience to work in the theatre and I know I have improved greatly as a theatrical composer during the time I’ve worked on this piece.

Hannah: When did you first have the idea of turning the tragic Kitty Genovese story into a stage work?

David: Back in 1998, I got the idea from a painting by Jerome Witkin. THE SCREAMS OF KITTY GENOVESE is a large oil painting that depicts a woman sitting up in bed near an open window; her stunned face is turned towards the street beyond the window. That set my imagination churning. I wanted to explore the connection between a scream and an aria, two extreme forms of vocal expression. After I did some research, including reading the transcripts of the trial, I was hooked. I met Will later that year at the Performing Arts Lab in Kent, England, where we worked on the first 8 minutes of the piece. After giving Will the lyrics to a ‘love song for a man with a hunting knife’, he wrote the song WINSTON IN THE NIGHT in about twenty minutes. The song is a plaintive, disturbing howl of yearning sung by a man looking for the right woman; it embraced the twisted romance as well as the horrific agenda of the killer, Winston Mosley. I knew I had found the perfect collaborator in Will.

Hannah: What did you find challenging when you first worked with David’s libretto?

Will: There were a lot of words! David had essentially written a brilliant play in the first draft. In a sense it had everything it needed almost without music. The challenge in the first instance was to find ways to bring the text down without losing the power of the work and allowing the music to tell the story also. David is very good about changes, although I’ve learned that if he really wants to hang onto an idea he will! But that’s a good thing because he always does that for a strong reason. There was also a lot of non-rhyming material and I had to develop a kind of recitative style which would suit the drama. Again, that work has helped me grow as a composer.

Hannah: How do you feel about a younger generation of music theatre practitioners wanting to produce your work?

David: I couldn’t be happier that a new generation is going to explore this work. Will and I have worked with college students in the US and the UK and it has always been a wild phenomenon to see young artists embrace the raw passion and terror of the score. I think the story is timeless, and sadly, we see its resonance in the headlines on an almost daily occurrence, especially with the advent of streaming horrific events that are witnessed by a generation eager to archive their every action, including violence and abuse. I hope this cast digs deep into the material and rips the theatre open, and shares this cautionary tale of what happens when neighbours turn away from helping one another. 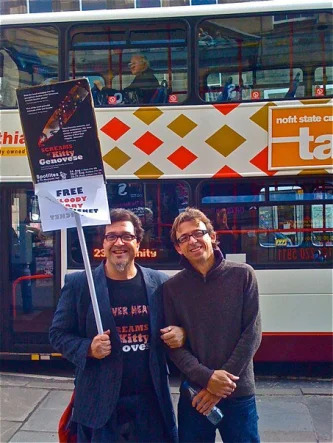 “Hold the hand-wringing over the precipitous decline of the American musical theater, please.” Keep your eyes and ears open – The Screams of Kitty Genovese will have you on the edge of your seat.” NY Times, 2006

”In addition to being one of the most powerful operas of the last decade, The Screams of Kitty Genovese gave me hope for the renewal of musical theater.” Robert Brustein/ New Republic/ 2001

“So allow me to be among the first to shout from the rooftops in support of Todd and Simpatico’s score. Alone of those I’ve been exposed to at NYMF this year, this one would not be inappropriately compared to the greats of the layered, theatrical-collage form . . . if it’s any indication of what they’re capable of, Todd and Simpatico could have glorious careers ahead of them.“ Matthew Murray/ Talkin’ Broadway/ 2006

“What ultimately stays with you is the score. Though, mostly dissonant and unmelodic, it suits its material and makes for an intense and powerful experience”  Julia Furay/ Curtain Up/ 2006

“The music (Will Todd) is exceptional in its evocation of what these people were thinking and feeling, reflecting all the tensions in every one of their lives.”  Oscar E Moore/ Talk Entertainment/ 2006